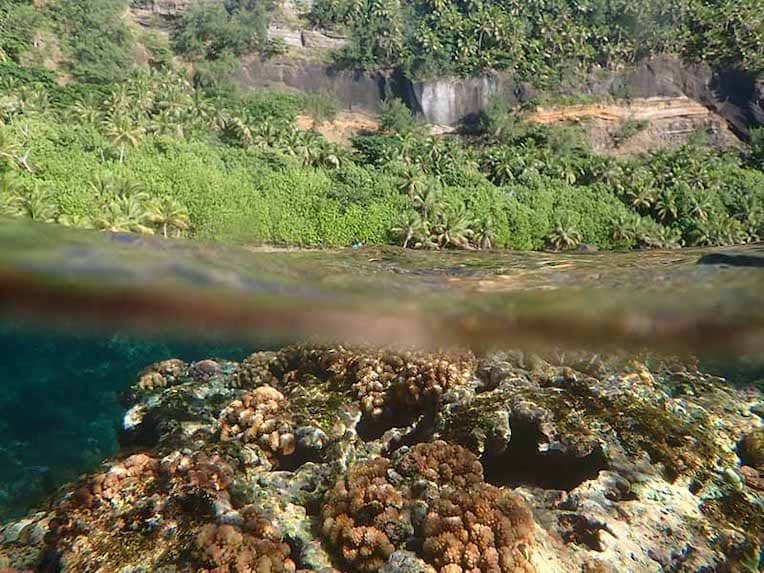 Pocillopora corals off the island of Pagan in the Northern Mariana Islands chain photographed by University of Guam Marine Lab researchers in May. 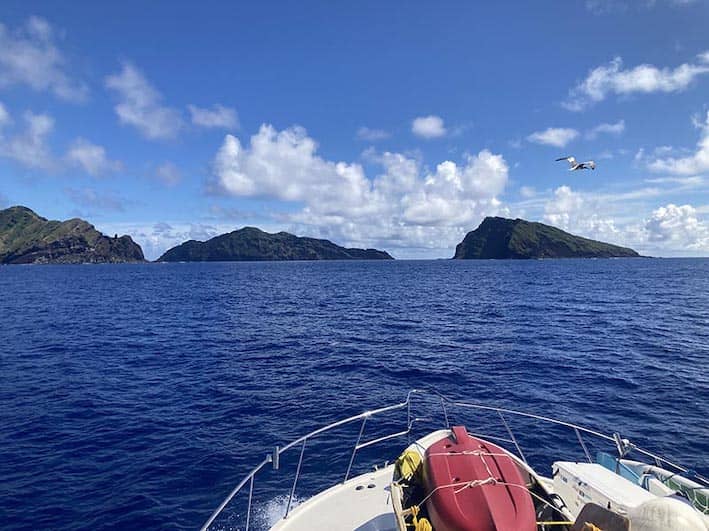 The University of Guam research team approaches the Maug Islands at the top of the Northern Mariana Islands archipelago. Like all other Mariana Islands, Maug is of volcanic origin. It consists of three islands that are part of an eroded outer rim of a submerged volcano. The inner caldera, or crater of the volcano, is approximately 1.4 miles wide and 740 feet below sea level but rises to approximately 70 feet in the middle. 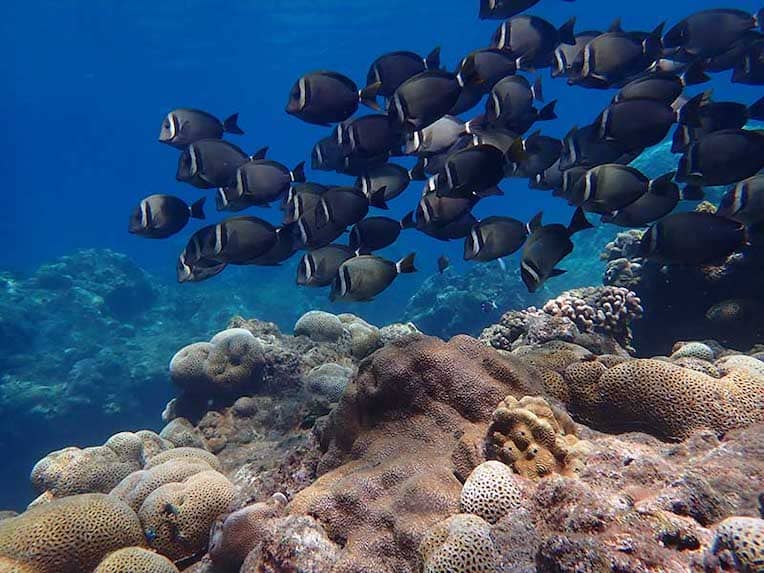 A school of fish swims over the coral reefs of Pagan. The Marine Lab research team is analyzing the genetics of eight coral species from Sarigan, Pagan, and Maug that were selected for their reef-building ability and their ecological importance to other species. 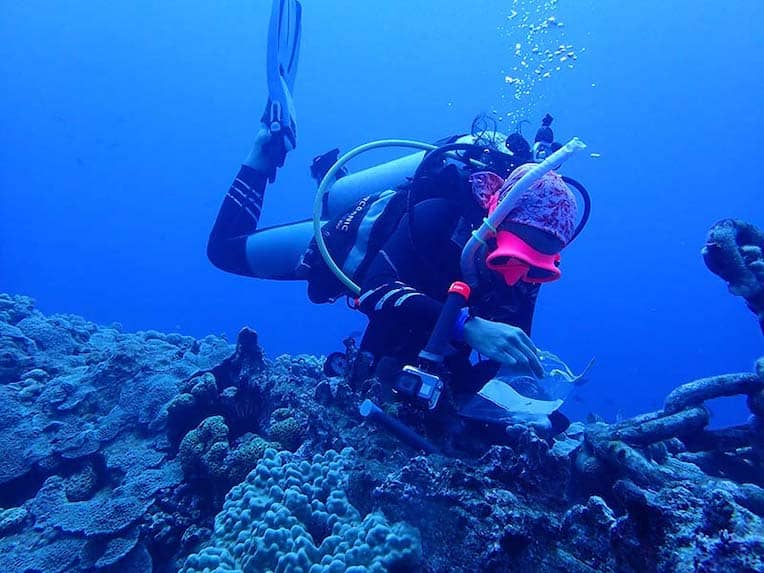 University of Guam Assistant Professor Sarah Lemer collects a coral sample from the caldera of the Maug Islands in May. 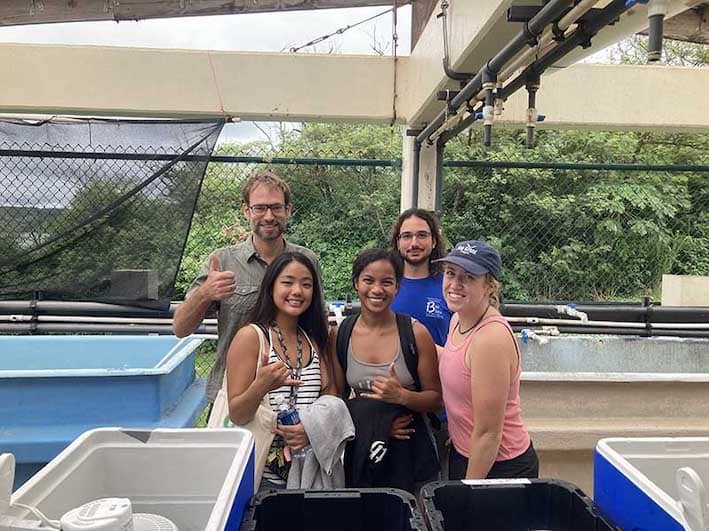 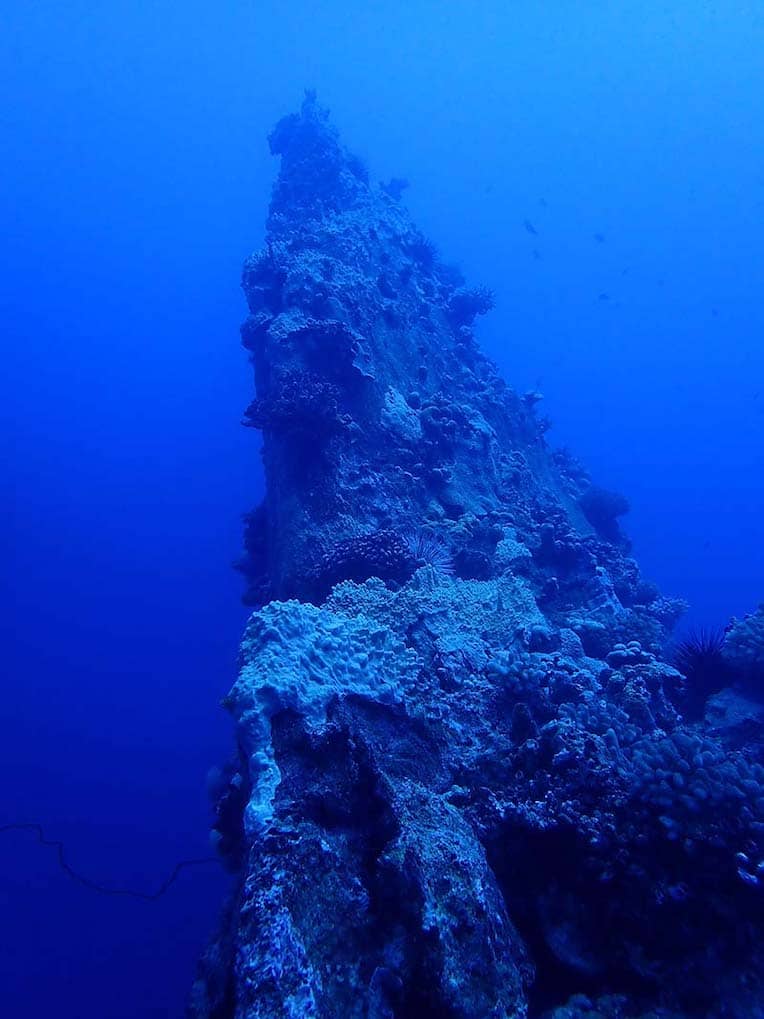 A volcanic formation near the pinnacle of the mountain in the middle of the Maug Islands caldera is overgrown with reef corals approximately 80 feet below sea level.
❮
❯

A first-time study on the genetics of corals from the Northern Mariana Islands of Sarigan, Pagan, and Maug is underway at the University of Guam Marine Laboratory with with funding from the  UOG Sea Grant program and support from the National Science Foundation-funded Guam ESPCoR grant.

A four-person research team spent 10 days on these islands in May collecting eight different coral species known for their reef-building ability and ecological importance to other species. The team is now sequencing and analyzing the DNA of the corals to identify if and how coral populations throughout the Marianas archipelago are connected and, therefore, how resilient they may be to warming waters.

“We are looking to understand the roles of these northernmost Mariana islands and their coral reefs. Can they act as reserves for the declining reefs around the southern Marianas, or do they, in contrast, depend on our reefs?” said David Combosch, associate professor of population genomics at UOG. “We will be spending months analyzing the data to understand the patterns of genetic diversity, connectivity, and adaptations across the islands.”

Combosch is spearheading the study as lead researcher of the Island Evolution Lab at the UOG Marine Lab. Working with him are UOG alumnus James Fifer and his doctoral program adviser from Boston University, Assistant Professor Sarah W. Davies, as well as Assistant Professor Sarah Lemer, postdoctoral researcher Héctor Torrado, and graduate biology students Joe Proietti and Mikay Reuter, all with the UOG Marine Lab.

What we don’t know

By analyzing the DNA sequences of these corals, the team can not only document the genetic diversity of corals on these islands for the first time, but can learn about gene flow — or the transfer of genetic material from one population or island to another.

“What we don’t really know is how much and in what direction corals across islands are connected via larvae exchange and interbreeding — or if each island has their own, distinct coral stock,” Combosch said.

If coral populations share DNA across the Marianas, there is greater likelihood that reefs will get what they need to adapt to future ocean conditions.

“Since Guam corals live in generally warmer water than corals on the northernmost Mariana Islands, they might be better adapted to deal with the warmer waters expected as a consequence of global climate change,” Combosch said. “But it may well be the other way around. Occasional pockets of hot water in the northern CNMI could have pre-conditioned those corals for hotter days. This is one of the things we’re looking into.”

Additionally, the northern corals may be better equipped for more acidic waters, Combosch said, since they have lived for centuries near a volcanic vent inside the Maug caldera, which releases carbon dioxide and has created a more acidic environment.

The team is also conducting heat-stress experiments on two types of corals from Maug, Sarigan, and Pagan — Acropora surculose and Pocillopora meandrina — to see how the same corals from different islands respond.

During an internship last week at the UOG Island Evolution Lab, Northern Marianas College students Subin Cho and Richelle Ramon worked with UOG graduate research assistant Mikay Reuter to reproduce the heat-stress experiments for this study and witness the effect of warming waters on Marianas corals.

They also learned about the relationships that corals have with other species in the ecosystem and the other stressors corals face, including pollution and overfishing, that can limit their ability to recover from bleaching events and adapt.

“It was an eye-opener to see how different species and organisms create relationships with each other in order to thrive and survive,” said Cho, a sophomore working toward an associate degree in natural resource management. “We pollute, neglect, and overlook our coral reefs and believe that many years after, it will still be there. However, after this internship, I learned that these things we are so used to will soon disappear if changes are not made.”