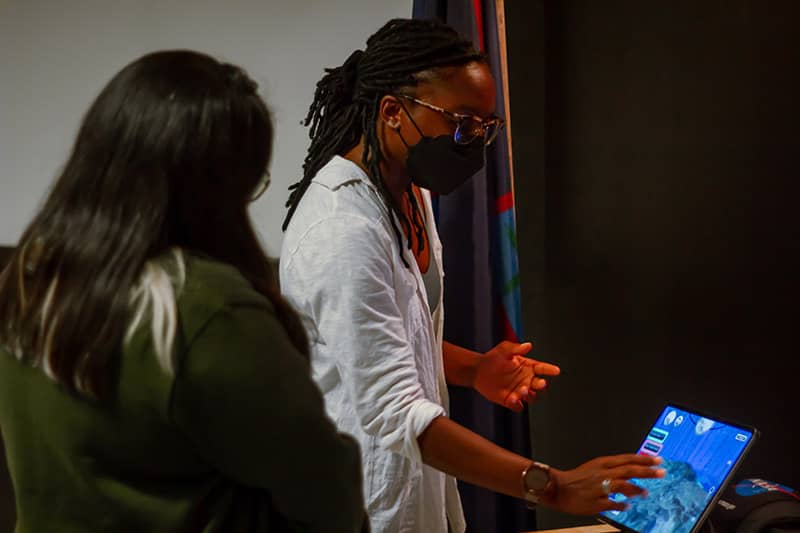 Stephanie Wright, a University of Miami graduate student and field campaign manager with the University of Miami Aircraft Center for Earth Studies, demonstrates how the NASA NeMO-Net app works during an outreach event on June 18 at the T. Stell Newman Visitor Center in Santa Rita. 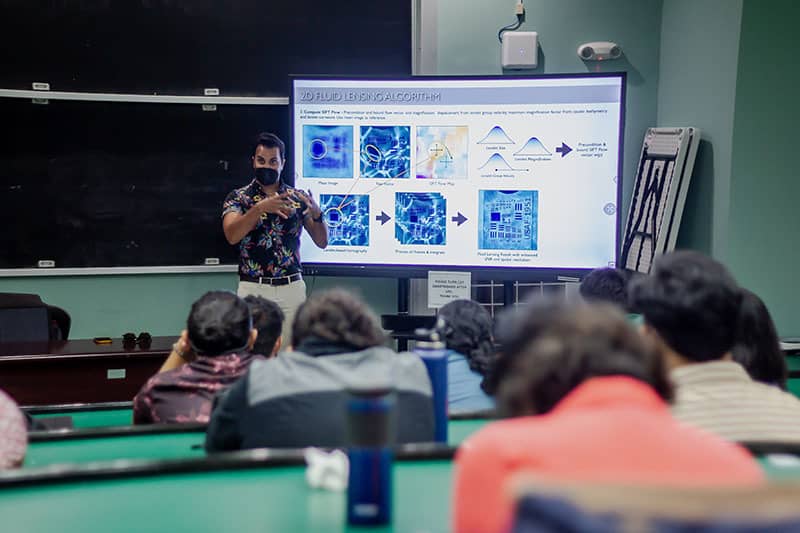 Ved Chirayath, project lead on the NASA NeMO-Net app, explains to summer program students how fluid lensing technology works on June 17 at the University of Guam. Chirayath, formerly the director of the NASA Ames Research Center Laboratory for Advanced Sensing, is now director of University of Miami’s Aircraft Center for Earth Studies, where he is using fluid lensing to map reefs around the world, including in Guam.
❮
❯

University of Guam researcher Romina King is on a team of 17 game developers and scientists who has received the NASA Group Achievement Award for developing a video game application to help NASA classify and assess the health of coral reefs around the world. The award is among the agency’s top honors, recognizing select teams who have made substantial contributions to NASA’s mission.

“I am extremely humbled and honored to be part of a team that brings together talent and knowledge from across the Pacific to work on technology that highlights critical information about an ecosystem that serves us all,” said King, an associate professor of geography at UOG who also serves as the UOG lead for the Pacific Islands Climate Adaptation Science Center and as associate director of the NASA Guam Space Grant program.

The app — the NASA Neural Multimodal Observation and Training Network, or NASA NeMO-Net — seeks to develop a comprehensive database of the world’s coral reefs, one of the planet’s most vital ecosystems.

Classifying all of the world’s coral reefs by hand would be a monumental task for researchers alone, so the app takes a citizen-science approach.

Users color code real 3D and 2D scans of the ocean floor to identify various classes of plants and animals. The user-gathered data from the game is then sent to NASA’s supercomputer, Pleiades, to classify the corals in the system and to assess the health of the marine environment.

King’s collaboration on the project has led to the prominent inclusion of Guam’s own reefs in the app, including the Piti and Tumon marine protected areas. She has been working with NASA Ames Laboratory members to map priority reef areas in Guam since 2019.

The team captured the ocean-floor scans being used in the app using drones and fluid lensing — advanced sensing technology invented by Ved Chirayath, who is leading the coral reef mapping project in Guam as well as the NeMO-Net project.

“What excites me most about the project is that users across the globe will not only be able to experience the beauty and value of Guam’s underwater environments no matter where they are in the world, but they will also be able to help NASA scientists while doing so,” King said.

Public education while contributing to science

With the classification maps produced by the data, environmental managers and researchers will be able to better understand the state of coral reefs on an unprecedented scale. These insights can then be used to monitor the areas over time and develop solutions to many of the issues faced by the reefs, including rising sea temperatures, overfishing, pollution, and coastal development.

According to the award letter, the NeMO-Net team was recognized for “capturing the public’s imagination, teaching coral reef biodiversity and health while producing high quality science products for new research efforts.”

The NeMO-Net app, according to the published research article on the project, has been downloaded in at least 73 countries more than 45,200 times and produced around 76,000 highly detailed coral classifications.

Chirayath and King concluded a fluid lensing mission in June of additional key sites in Guam, including the Achang Reef Flat Marine Preserve in Merizo as well as Sharks Cove and Ague Cove in Dededo. The images and data maps collected during the mission will be analyzed and are expected to be explorable in the app once processed.

The NeMO-Net app is available to download for free on the Apple App Store and Google Play Store. Learn more at www.nemonet.info.