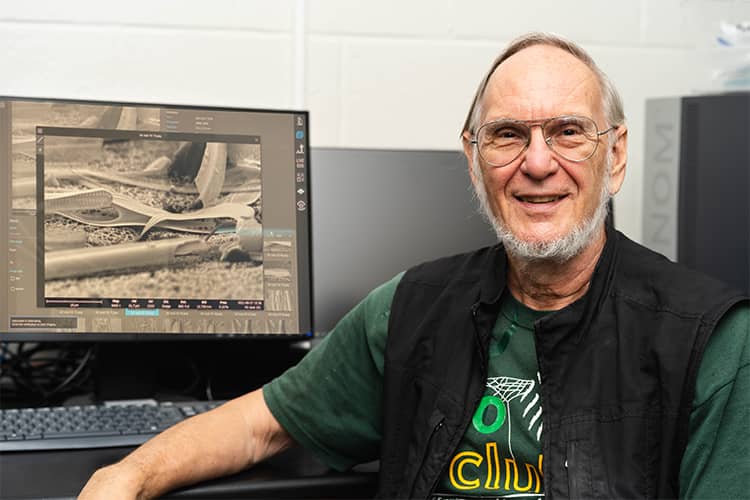 Professor Emeritus Christopher Lobban with a screen showing a tilted view of a new diatom species, Licmophora complanata, on the Scanning Electron Microscope.

This new species of diatom, Licmophora complanata, was named for its flattened cell wall. The diatom was found in a sample of algae from Majuro Atoll collected in 1990.
❮
❯

The study, which was funded by the University’s National Science Foundation EPSCoR grant, was accepted in October for publication in the peer-reviewed journal Diatom, a publication of the Japanese Society of Diatomology.

Diatoms are single-celled algae found in oceans, lakes, and rivers. They are considered important primary producers on Earth. According to Lobban, diatoms produce an estimated one-fifth of the oxygen in the air we breathe.

The new species of diatom, Licmophora complanata, was named for its flattened cell wall.

According to Lobban, the diatom was found in a sample of algae from Majuro Atoll that he collected in 1990. Licmophora is a genus of benthic diatoms. Diatoms within this genus are common and epiphytic — meaning that they perch on seaweeds, like orchids perch on trees.

“It’s a really odd-looking Licmophora,” Lobban said. “Licmophora are sort of people-shaped. They have a top and bottom and a front and back. The dead shells can usually be seen in the front and back views, but this one was always giving me a side view.”

Lobban was able to thoroughly examine the specimen once the Microscopy Teaching & Research Laboratory, which he runs, received a new Scanning Electron Microscope through the EPSCoR grant in May 2021.

“The microscope has a stage that allows you to tilt it up to 80 degrees while examining a specimen,” Lobban said. “When I did that, I was able to see its shape, which is actually kind of complicated.”

According to Lobban, this is not the first time he has named a species of Licmophora.

“It’s not a huge genus and there are not many people working on it in the world. Most of the species here seem to be new to science. This is the 16th Licmophora I’ve named,” Lobban said, “and I’m not done with them yet. I’m working on a paper now with seven more species. It and several of the others have student co-authors.”

Interested in sports, recreation, and fitness? Tune into the Triton Athletics video podcast!
Audition for the Latte Tones on Jan. 20!
Info webinar this Friday on the Knauss Fellowship for grad students