Home » School Of Business And Public Administration » The 2018 Great Debate 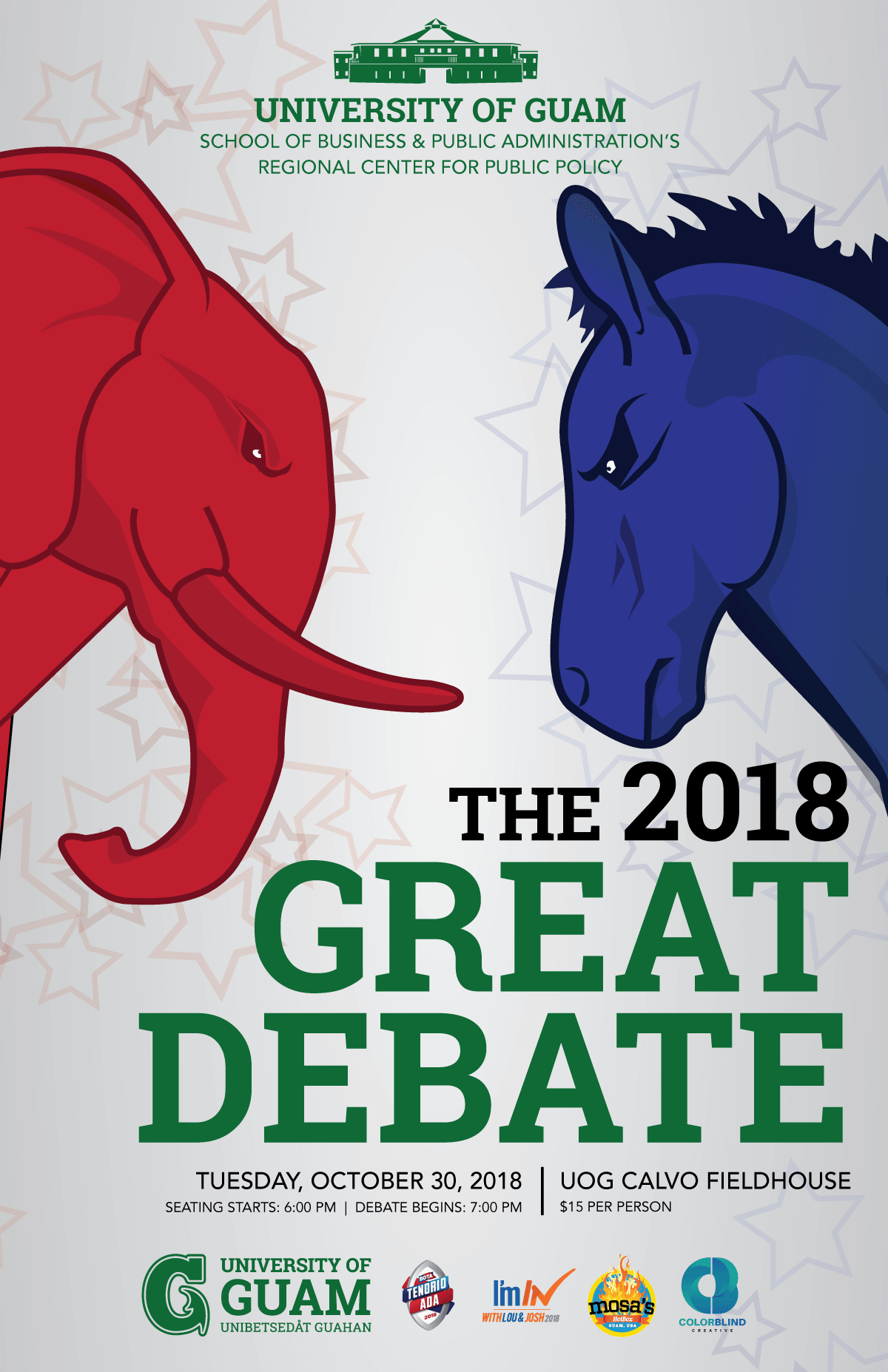 The Great Debate is one of the most anticipated events culminating the Gubernatorial race in any election year.

In 1994, the honorable senator, Dr. Judith D. Guthertz and members of the Public Administration and Legal Studies (PALS) student organization originally developed the Great Debate as a class project. The PA304 (Public Relations and Public Information) class was charged with the challenge of hosting a special public service project. As a result, the Great Debate of 1994 was born.

The Great Debate of 1994 included a Primary and a General Election Debate held just prior to the primary and general elections. That year, all Governor and Lt. Governor candidates competing for office participated in the debates. Large audiences gathered at the UOG Field House, the largest indoor venue of its kind, to witness these teams face off. Proceeds from the ticket sales were used to support the School of Business and Public Administration (then, College of Business and Public Administration) programs; particularly the Public Administration and Legal Studies (PALS) division. The original faculty advisors included Dr. Judith Guthertz, Dr. Ron McNinch, Professor Ron Aguon, Professor Nina Callahan and Professor Anita Sukola.

Since 1994, the School of Business and Public Administration has hosted a Great Debate every Gubernatorial Election Year. Over the years, the debate has grown significantly. Support from the island and across the UOG campus community has been immeasurable and tantamount to the event’s success. In 2014, the Master of Public Administration, in partnership with the UOG Endowment Foundation, took the helm of the Great Debates. Today, the Great Debate is in the capable hands of the School of Business and Public Administration’s Regional Center for Public Policy and powered by the Master of Public Administration and Endowment Foundation. The Regional Center for Public Policy was founded in Fall 2016 with the mission to innovate and improve governance, leadership and public policy for the people and institutions of Guam, the Asia-Pacific, and the world. Through education, research, professional development and public service the center will be the premier catalyst for excellence and a repository of indigenously relevant knowledge.

Despite partisan affiliations, people come together and give back in a way befitting of true public service. The people of Guam are engaged citizens who care about the future of their island and their government. The island can expect that when the gubernatorial candidates face off in the last and largest debate, just days shy of the deciding election, that history will be forever etched; an event so grand that nothing is more befitting than –The Great Debate.

The Great Debate serves as a public forum for our gubernatorial candidates, certified by the Guam Election Commission, to express their platform, views and positions on issues that truly impact our island community just days shy of the general election. It is our intention to enable the voting public to make educated and informed decisions. It is our sincere hope that our community walks away from this event with the confidence that they will be making the best choices possible in the coming election.

The Great Debate is a student driven event. Students from the School of Business and Public Administration engage in the planning, organizing, and execution of the Great Debate.

The 2018 Great Debate will be formatted with 3 exciting rounds of questioning:

This round will field questions from the students. The same question will be asked of each camp.  Input will be sought from various stakeholders from within the university, outside of the university, and through the general community. The students will have the final say in the questions to be used in the debate. The questions will not be released in advance, will be kept confidential, and will only be known to a select few in the question committee. Broad topic areas for questions will be on Public Safety, Healthcare, Education, Economy, and a UOG centric question.

This round will field questions from the opposing gubernatorial camps themselves. Each camp will be asked to produce 7 questions.  The camps are asked to bring with them their 7 questions to the debate.  During the actual debate the candidates will draw three questions from their opponents randomly.  The questions, prior to their selection and reading, will only be known to the respective camps. 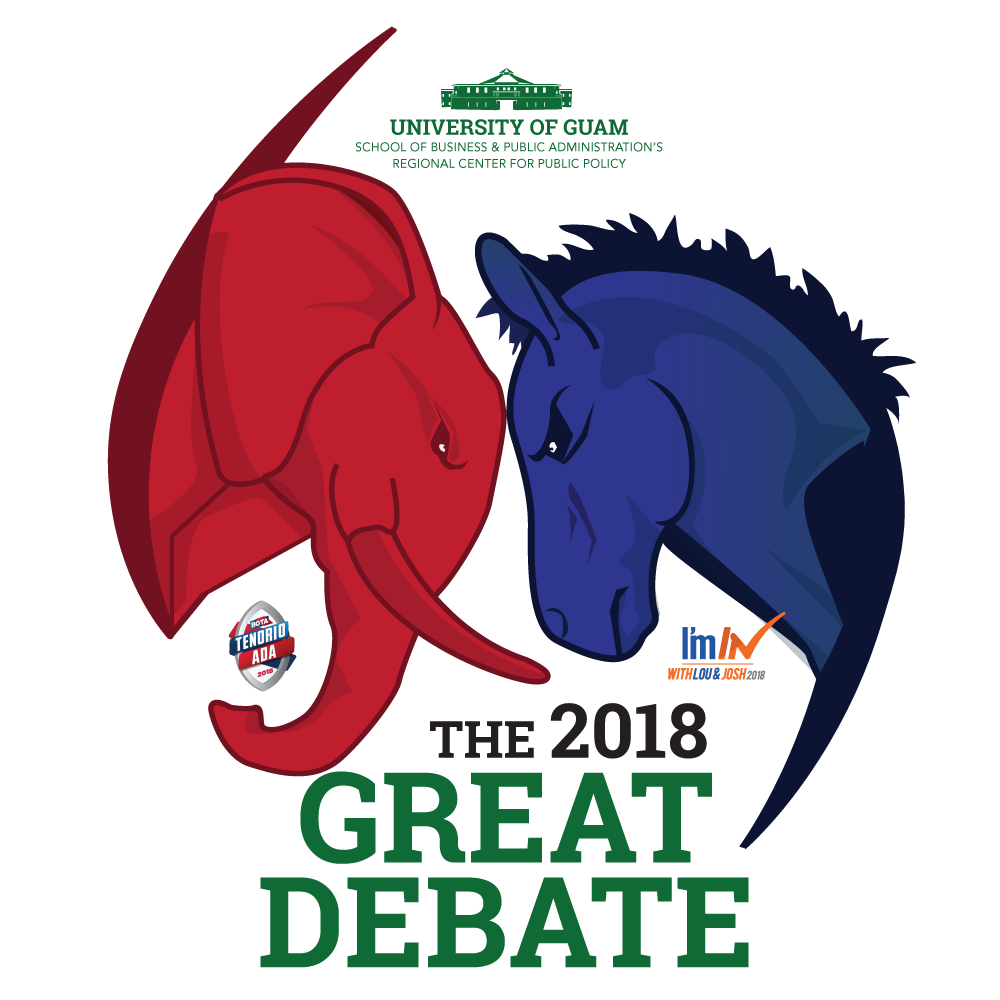