The University of Guam Residence Halls is a co-ed facility consisting of three, two-story buildings:  Dorm 1, Iya’hami Hall and Gumata Hall.  Located on the University campus grounds, it is conveniently adjacent to the University’s Field House grounds.  Each building has two wings, separating the males from the females.  Currently, there are a total of 115 dorm rooms (includes 3 Guest Studios) to accommodate the maximum number of 207 residents. The common areas consist of kitchens for residents to cook their own meals, bathrooms on each floor, convenient laundry facilities, study rooms, TV lounges, a Computer Lab. All dorms, including parking lots are equipped with CCTV security camera systems.

Dorm 1 building is shared with the University’s ROTC unit located on the 2nd floor.  The 1st floor was modernly renovated and completed for student housing and facilities in August 2011.  It consists of 12 female and 11 male rooms and is a 24/7 quiet and alcohol-free zone. The rooms contain built-in beds, cabinet, desk, drawers, and shelves, along with a chair and balcony. The Campus Security Office, LSG Convenience Store, and Laundry Room are located on the 1st floor, male wing. Entrance to the kitchen and study hall are located on the 1st floor, female wing. 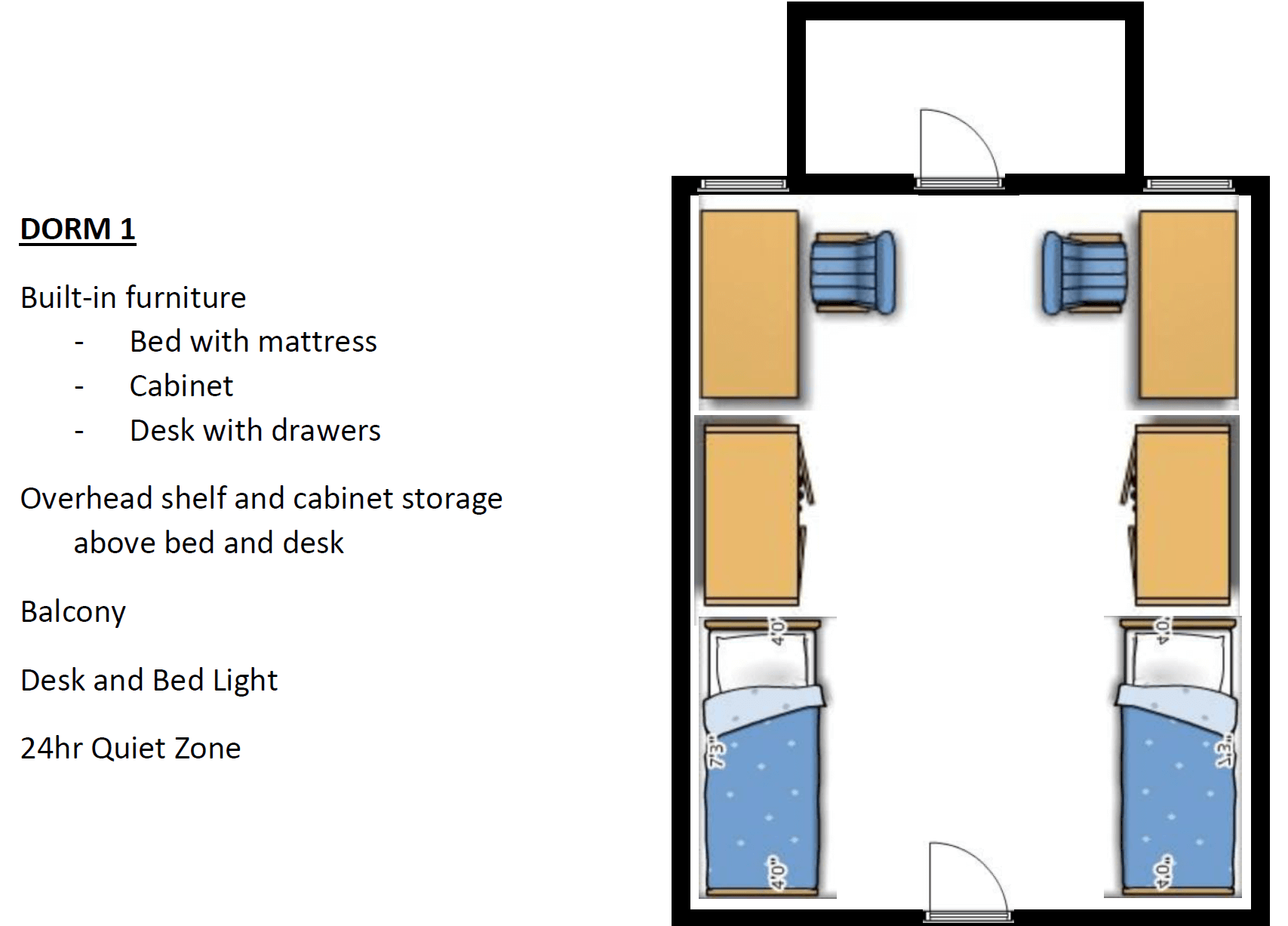 Iya-hami Hall (meaning “our place” in the Chamoru language) is a 2-story building and was renovated in 1991. It contains 19 female and 23 male rooms in each wing. It also has two air-conditioned Guest Studios with its own bathroom (usually for short-term residents) located on the second floor.  It houses residents in air-conditioned and non-air-conditioned double and single occupancy rooms.  Each room is equipped with a bed, mattress, desk, drawers, and closet, as well chair and balcony. Iya-hami Hall has two common kitchens/dining on each floor (contain 2 electric ranges and a microwave), two common bathrooms on each floor and wing for male and female, a TV Lounge on the 1st floor and a Study Hall on the 2nd floor. The Residence Halls Office, Director's Office, and EEO/ADA Office are located in the Iya-hami Hall. 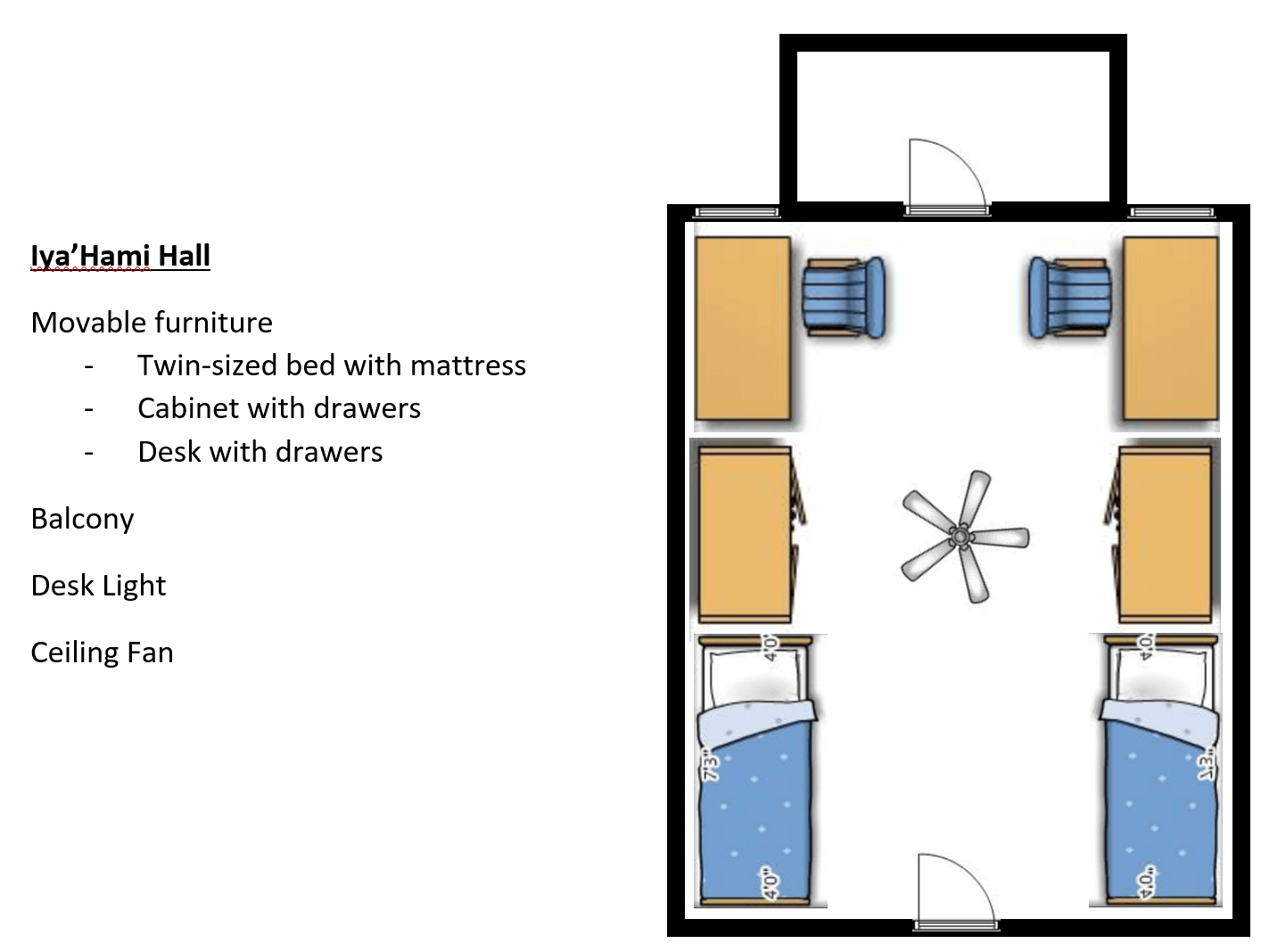 Guma’ta Hall (meaning “our home” in the Chamoru language) is a 2-story building and received a full-scale renovation that was completed at the end of 2000.  It contains 24 female and 24 male rooms in each wing and houses residents in air-conditioned double and single occupancy rooms.   Although the rooms do not have balconies, they are spacious.  Each room is equipped with a bunkable bed, mattress, wardrobe closest, desk and chair.  Guma’ta Hall has two common kitchens/dining on each floor, each containing  2 electric ranges and a microwave.  It has one common bathroom on each floor and wing for male and female; 1st floor bathrooms are newly renovated and extended to provide additional toilet and shower stalls.  Laundry facility is on the 1st floor at the male wing, while the TV Lounge, Study Lounge, and Computer Lab are also on the 1st floor. The cafeteria is located on the second floor. 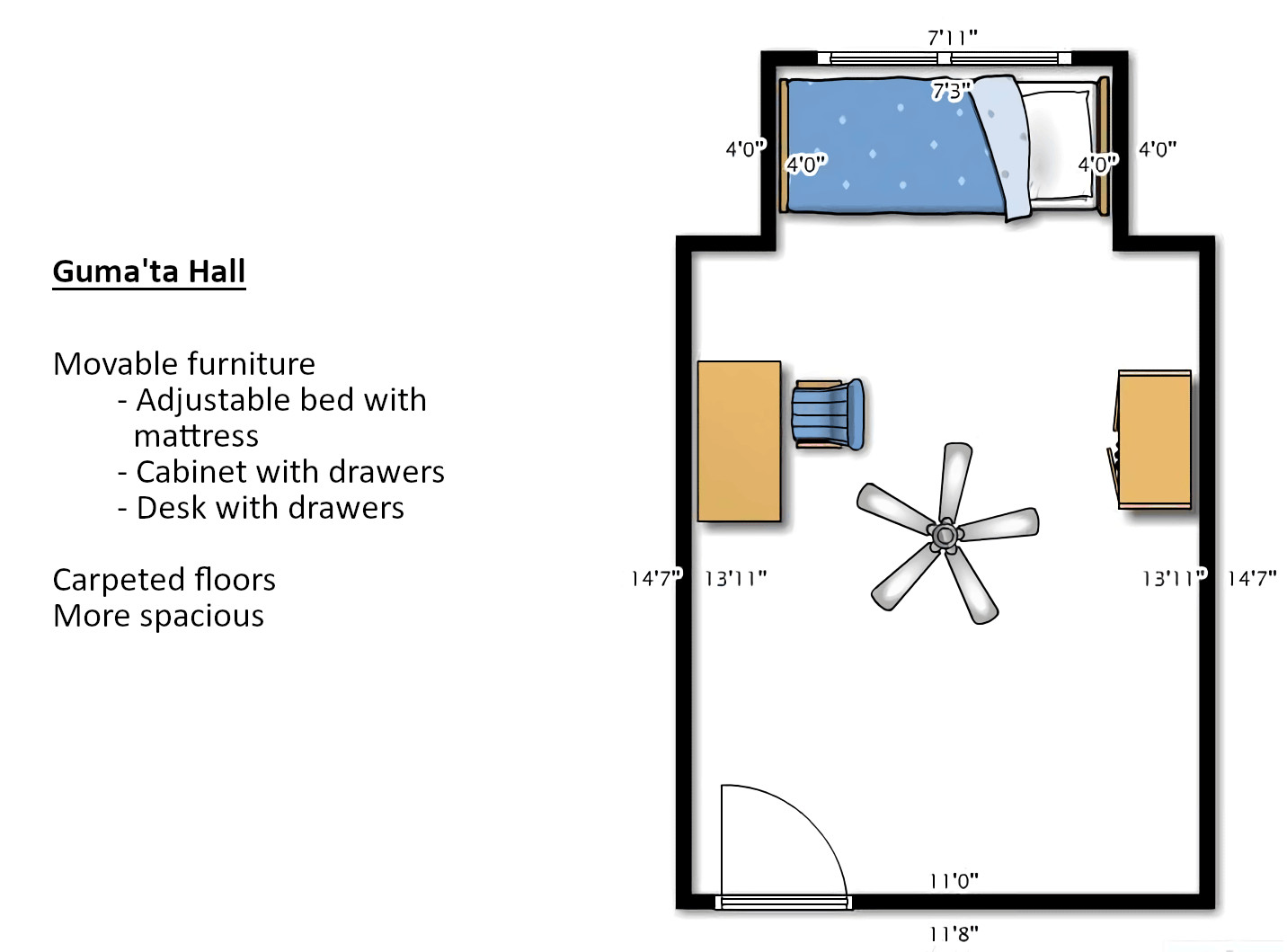 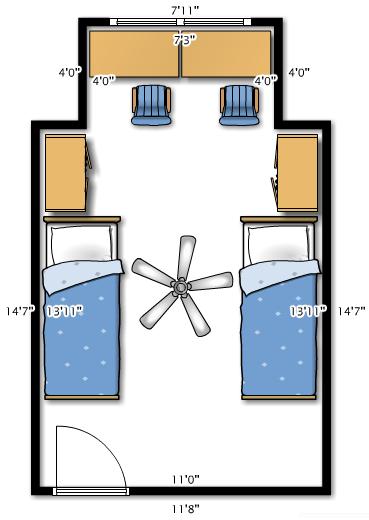